Trusona – On a mission to eliminate passwords from the internet 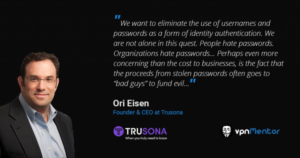 As soon as I started speaking with Ori Eisen, the founder and CEO of Trusona, I felt a surge of energy in the room. I quickly discovered the reasons for that energy: (1) Ori is a naturally enthusiastic guy,  (2) Ori is extremely passionate about eliminating the use of passwords, and (3) we were speaking on the day that Trusona was announced that it raised $10 million in a Series B funding round led by Microsoft Ventures (along with current investor Kleiner Perkins).

The other thing that I learned right away about Ori Eisen is that as much as he loves talking about Trusona and password elimination, he enjoys showing it much, much more. Before I could get in my first question, he had me downloading the Trusona app and using it to log into the TruClub demo site they built. I suggest you try that as well.