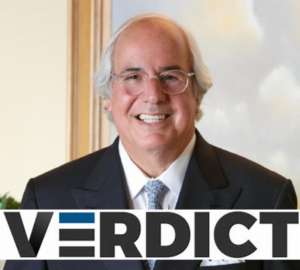 Around the world, there are currently 121 global cyberattacks happening every second.  The threat is real and it’s costing businesses billions. Frank Abagnale — once called “the world’s greatest con man” turned top FBI guru — has set his sights these cyber attackers.

After being immortalised in Steven Spielberg’s Catch Me If You Can, Abagnale now works as a fraud expert for the FBI and an AARP Fraud Watch Network ambassador.

“My life’s work is now about helping businesses protect against fraudsters,” Abagnale tells Verdict. “Anyone who lives in the U.S. or U.K. can count on the fact that they’ve already been hacked. Any business connected to the internet is likely being probed this very minute by hackers.”

The biggest movement in the internet era is now underway, according to Abagnale

Password technology is archaic and insufficient in protecting users. Aside from burdening the public with the task of providing millions of answers to knowledge-based questions, passwords are hugely outdated. Passwords were invented back in the 1970s, and unfortunately, cyber crime continued to evolve while the security measures stayed stuck in the past.

Abagnale believes that the public and “far too many businesses” are entrusting massive amounts of sensitive data with passwords. They are “grossly underestimating the likelihood that their details have already been stolen by digital fraudsters.”

The anti-password revolution, which Abagnale labels “the biggest movement in the internet era” makes sense. By ridding the world of passwords, there will be no incentive to steal passwords. Malware that steals passwords will lose its power and the value of passwords that are bought and sold among criminals will diminish. “As someone who knows the power of impersonation, trust me, there are better ways to affirm people really are who they claim to be,” explains Abagnale.

Abagnale believes that another global cyber attack is imminent

Cyber attacks are getting more sophisticated and are coming at an increased rate. The root causes aren’t always passwords, but, according to Abagnale, “the threat will remain when static passwords are easily being used by cyber crooks”.

“The possibility of a larger, more devastating cyber attack is definitely looming. Most people just don’t know how easy it is for fraudsters to bypass passwords and knowledge-based answer-protected data.”

According to Abagnale, updating software as soon as patches become available, using advanced authentication, like two-factor authentication, and regularly backing up systems are now “critical”, especially for businesses.